Convertibles are probably the computers that demand the most effort from manufacturers during the design phase. And is that the need to have an efficient cooling system that occupies the minimum space possible, like any other portable equipment, bind the obligation to incorporate a solution that allows them to pass conventionally, which is the one in which they behave like a traditional laptop, tablet mode. And doing this really well is not easy.

Lenovo’s trajectory in the segment of convertibles and tablets is quite long. In fact, our laboratory has passed several proposals of this brand in recent years, such as the Yoga 900, which is one of the precursors of the convertible to which we dedicate this analysis. The most striking of the latest equipment of this manufacturer from the point of view of design is undoubtedly its ingenious hinge, which allows to move from one mode to another very easily and without compromising the structural integrity of the convertible. The Yoga 920 that we are dealing with has this characteristic, but it is not the only reason why it is an interesting product. Let’s see what he offers us in detail. 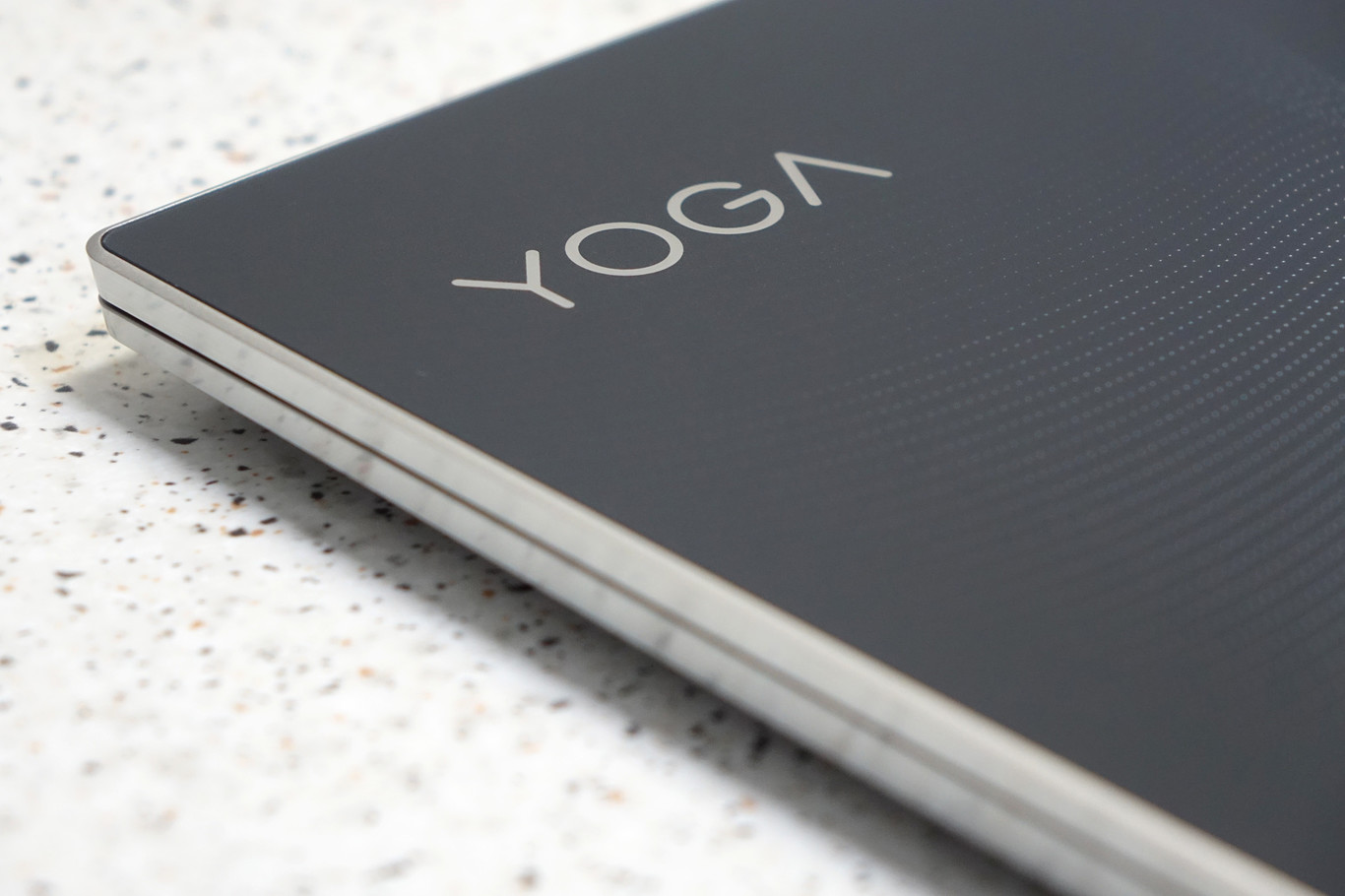 If we leave aside the hinge of which, deservedly, I have spoken to you in the first lines of this analysis and we strictly adhere to its specifications, undoubtedly the most striking component is its screen. The four versions of the Yoga 920 proposed by Lenovo incorporate 13.9-inch IPS LCD panels, but two of them use devices with Full HD resolution, and the other two 4K UHD panels. The equipment that we have analyzed is the most economical of the two models with 4K UHD resolution because it incorporates an Intel Core i5-8250Umicroprocessor instead of the Intel Core i7-8550U which has the most ambitious Yoga 920 version.

Otherwise, as you can see in the table below these lines, the specifications of this equipment are consistent with what you would expect from an ultralight or a convertible today. And is that its 8 GB DDR4 main memory, its graphics logic Intel UHD Graphics 620 and its solid state drive of 256 GB should be enough for most users interested in such a computer.

Later on, in the section that we dedicate to performance tests, we will check if these components perform properly and really offer us a productivity level with the circumstances. Until then, we will give you a vote of confidence. Here you have the specifications of this equipment in detail:

Design and finishing: The hinge, the heart of this convertible 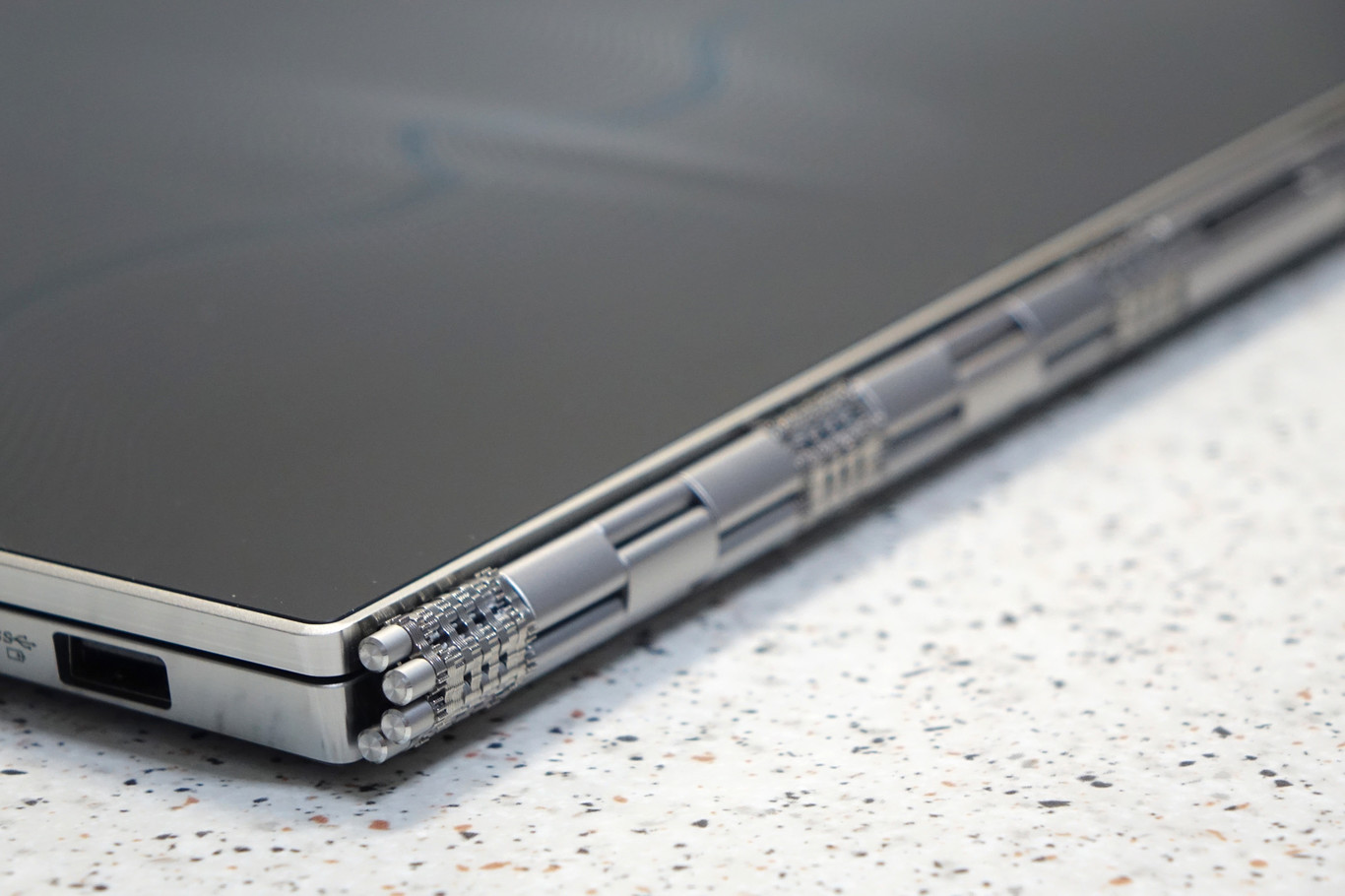 I have started the analysis talking about the hinge of this team for a reason of weight: it is one of the most difficult elements to design, and, at the same time, most important of a convertible. There are many ways to implement this component, and, to date, the option for which Lenovo engineers have opted seems to me one of those that offers a more satisfactory experience. I like it for two reasons. The first is that it allows you to switch from traditional portable mode to tablet mode in a very simple and fast way, something that is not as frequent as it should be. And the second is that its great strength allows you to manipulate it without reducing, as I told you at the beginning of the analysis, the structural integrity of the team.

But there is still more. It is quite surprising, but the way in which the hinge has been designed also facilitates the evacuation of hot air from inside the equipment. In fact, the ventilation intakes of the chassis are housed next to the hinge itself. In this way, when the screen is displayed, the air exits are released and the cooling circuit is started, which must prevent both the CPU and the graphic logic from reaching their maximum temperature threshold. A little later we will check if it fulfills its purpose effectively. A final note regarding the hinge: inside the WiFi antennas also reside.

On the other hand, the chassis of the equipment is entirely made of aluminum, a material of great structural rigidity and wear resistance also used by other manufacturers in its high-end equipment, which reminds us which is the segment in which Lenovo intends to compete with this convertible. Its machining by CNC (numerical control cutting machine) is impeccable, so as far as finishing is concerned I can not fault it. Even its thickness has been reduced slightly compared to its predecessor, Yoga 910, from 14.30 to 13.95 mm. 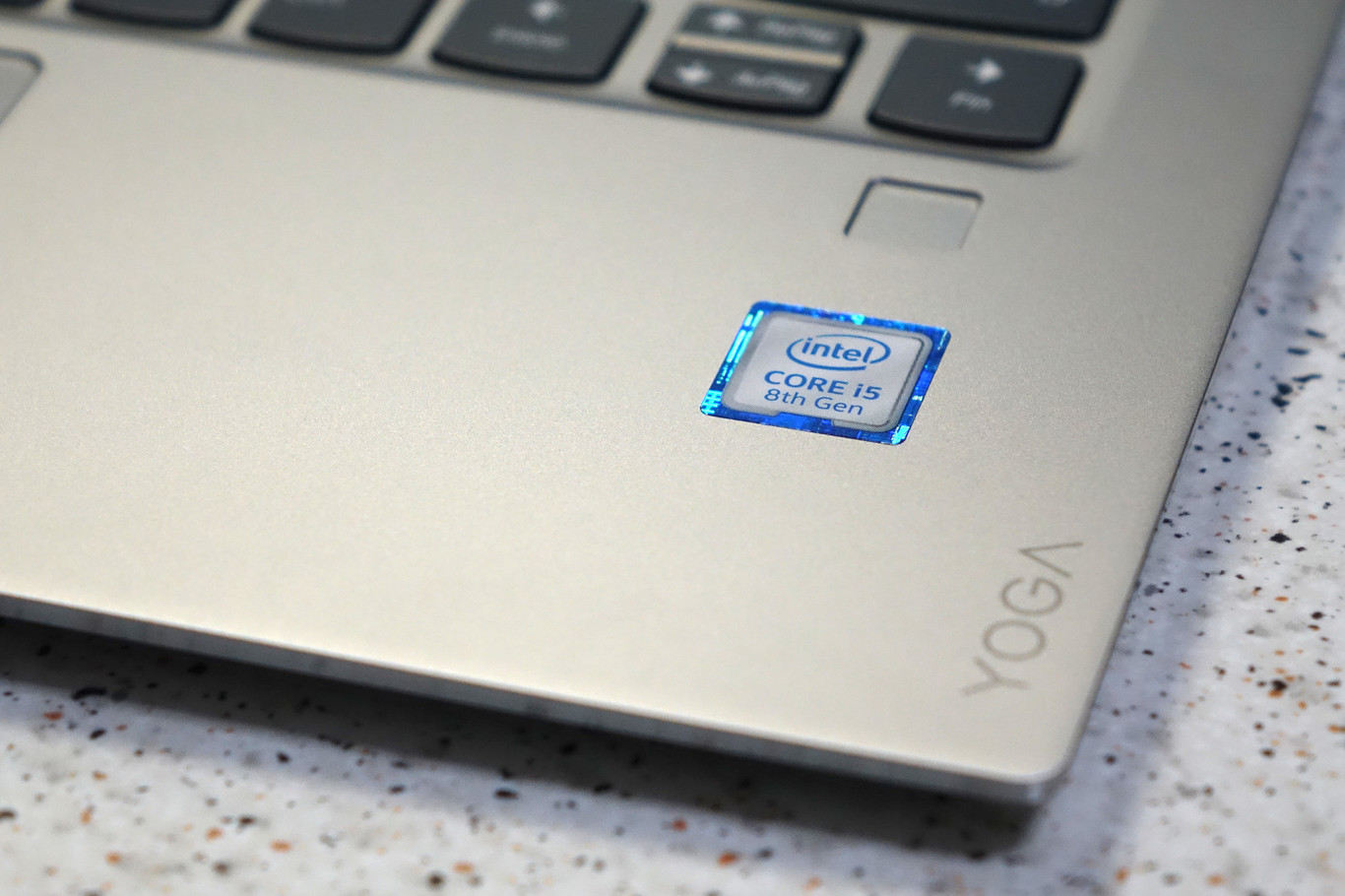 As you can see in the following image, the top and vertical frames of the screen are really thin. In fact, they have a thickness of only 5 mm, which is very good because they allow to take advantage of the space available for the panel effectively. However, the lower frame is much wider, something that draws attention when compared, inevitably, with the other three frames. It does not bother, but from an aesthetic point of view impoverishes the final result.

To analyze the quality of the IPS LCD panel with 4K UHD resolution that Lenovo has chosen, which, by the way, was manufactured by LG, I used the two tools I usually use: Nokia Test and Display Mate. Its overall quality is very high. The density of their blacks, their level of detail in dark areas and their chromatic richness remember, without reaching that level, those offered by the OLED panels, which I hope will give you an idea of ​​how good this screen looks Use it to play high quality photos or videos. In addition, it is a really luminous panel, which allows it to be used in spaces with a lot of ambient light without hardly being forced to force our eyes.

On the other hand, Lenovo includes with this convertible an Active Pen 2 digital pen with 4096 levels of sensitivity. This component offers a satisfactory use experience because it is quite precise, which in a way reminds us of the sensations transmitted by a good digitizing tablet. Even so, in my opinion it is a bit thicker than desirable, although I recognize that this is a personal perception and it is possible that other users seem to have the right thickness. 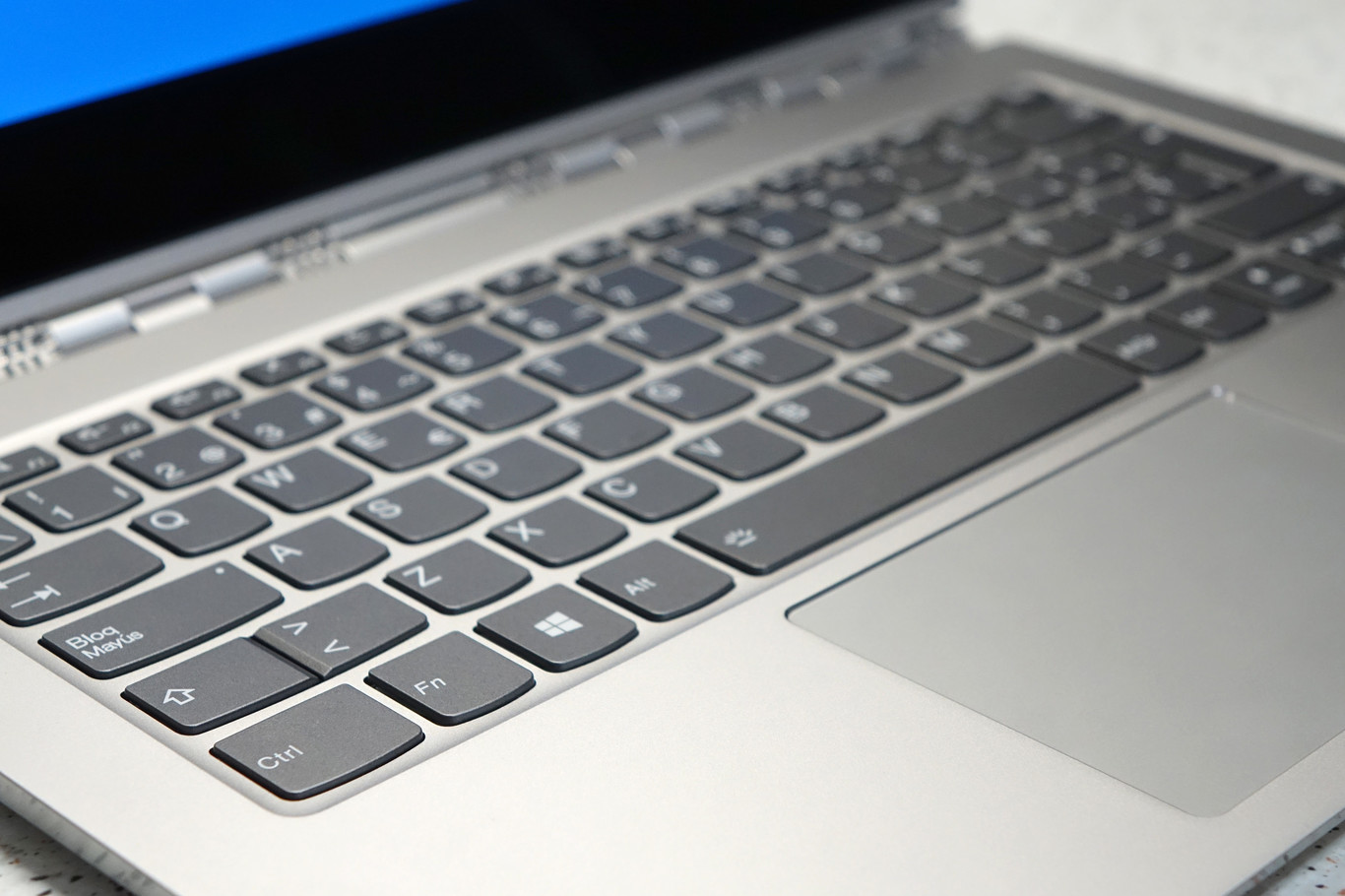 The keyboard, which is chiclet type, has good quality. The keys barely suffer from transverse oscillation, so once you get used to it, you can use it for hours without feeling fatigue or discomfort in the wrists. And the touchpad , on the other hand, is wide and has a high sensitivity, so it also offers a satisfactory user experience. I have nothing to object to these two components.

At the far right of the convertible, just below the keyboard, Lenovo has integrated a fingerprint reader that we can use, for example, to log in to Windows. I think it’s a good idea to have this resource in a team that many users may use in a strictly professional environment. In a domestic use scenario it may be dispensable, but in a professional space this element offers that extra security that is always welcome.

As far as connectivity is concerned, given the limited space available in the sleek chassis profiles, Lenovo has gone “to the chase”. On the left side of the computer there are two type C USB ports that enable the transfer of data and energy through the Thunderbolt, Power Delivery, Display Port and USB 3.1 protocols with full function. And, no doubt, the enormous versatility of these connectors advises to resort to them when the available space limits the number of ports that we can count on. On the right side of the convertible there is an additional USB 3.0 port with an always active load.

I can not conclude this section without telling you about a quality of this team that has a direct impact on our experience as users: its autonomy. And it is that during our tests has thrown a time between charges approximately 8 hours using it in an office environment and content creation. Yes, it has been permanently connected via WiFi.

This autonomy allows you to use it for a whole day’s work without having to charge your battery, which is really good. And, as you know, the equipment we have tested is one of the models that incorporates a panel with 4K UHD resolution. It is very likely that the autonomy of the two versions of the Yoga 920 that incorporate a Full HD panel is superior to that of the 4K UHD models, something that is worth taking into account in those use scenarios in which this parameter is crucial. 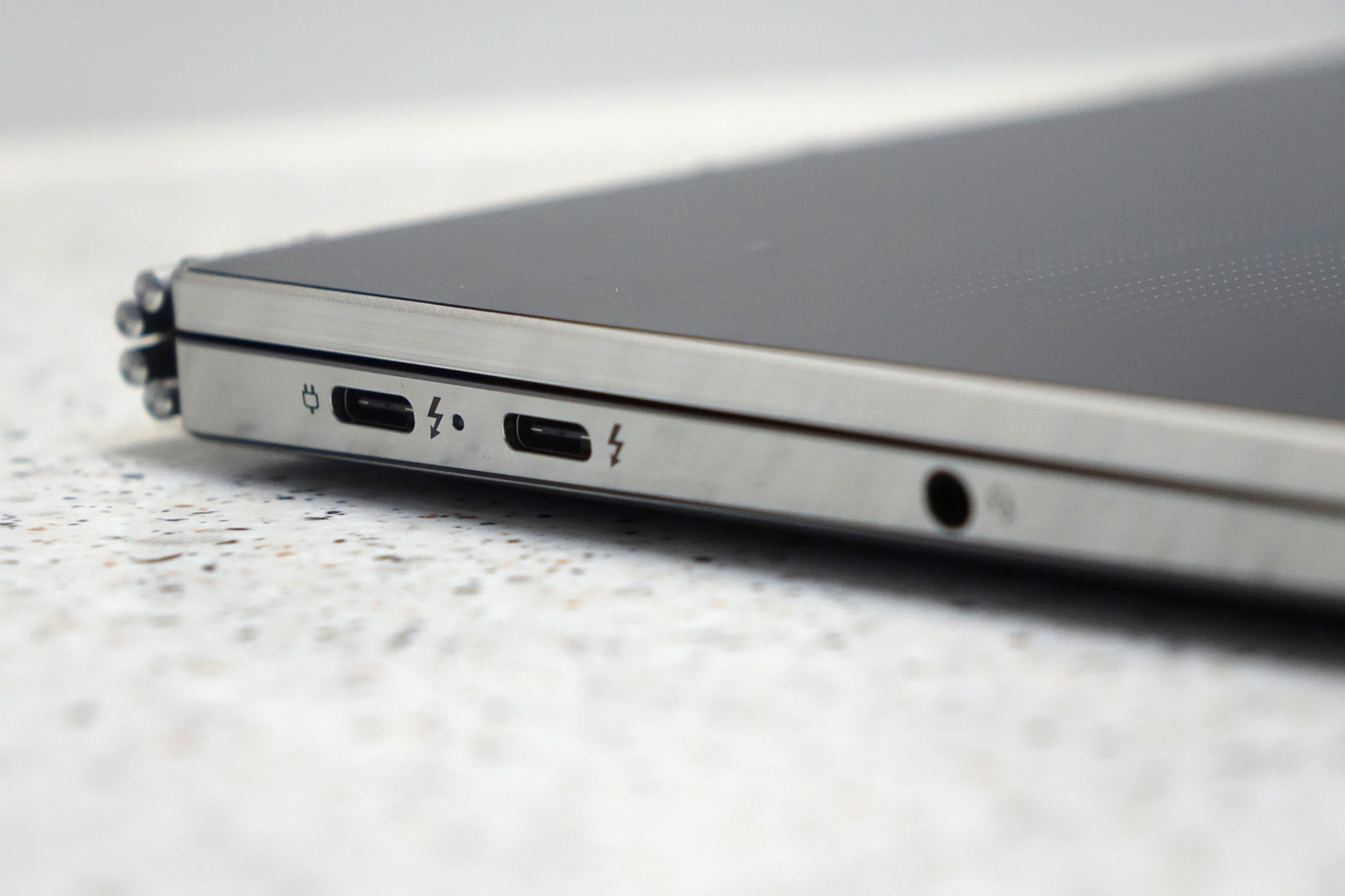 As I explained in the first paragraphs of the analysis, two of the four versions of the Yoga 920 incorporate an Intel Core i5-8250U microprocessor, and the other two an Intel Core i7-8550U. The model we have tested has the first of these chips, so its performance should be somewhat lower than that offered by the versions that have the Core i7 . Even so, its performance is not that bad.

Let’s start with PCMark 10. In this synthetic test this convertible has yielded a performance significantly superior to that of a PC for conventional office automation, and, logically, inferior to that of a computer for games. It’s what you’d expect, so here’s all in order.