Black and white is still a resource widely used by photography professionals. Just take a look at some of the snapshots of Sebastião Salgado, Trent Parke or Chema Madoz, among many other reputed photographers, to realize that black and white photographs have a huge expressive capacity. Insulting. Hence, they are so used in artistic photography.

The dynamic range of digital cameras has improved greatly in recent years thanks to the innovations introduced in the technology of image sensors. But many photographers prefer to dispense with the realism offered by color in favor of the emotional charge of black and white. The interesting thing is that, despite all this, the coloring of photographs is experiencing a “second youth”. The 16 digitally colored historical snapshots of which we spoke to you yesterday prove it. If you want to know how they are given color and what sense it can have to add it to a historical image, read on.

A hint of history

The process that allows us to color a black and white image is almost as old as photography itself. But before going into details and see what it is, it is interesting to put it in context. The foundations of photography were strengthened by Abū Ibn al-Haytham, a scientist born in present-day Iraq in the eleventh century who wrote a treatise on optics ahead of his time, and also explained the process of building a camera obscure. However, obtaining the first long-lasting photograph was produced eight centuries later, in the nineteenth, and is attributed to the French inventor Joseph Nicéphore Niépce. 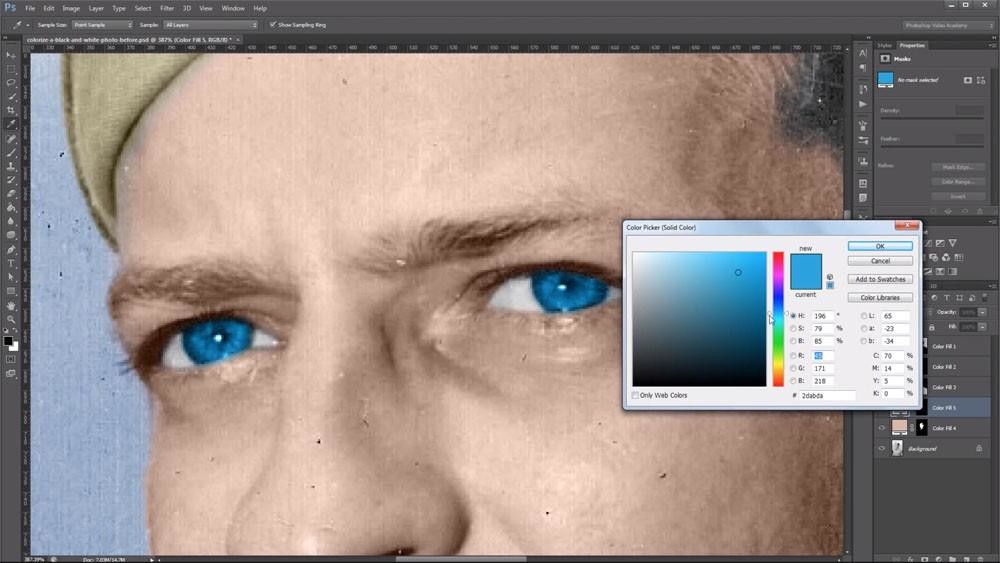 Niépce’s merit was that he was able to perfect the camera obscura built by Thomas Wedgwood two decades before him, and he also succeeded in choosing as a photosensitive substance bitumen, and as substrate a pewter sheet. Thanks to these innovations, he was able to take, in 1826, the first long-lasting photograph. In black and white, of course. The interesting thing is that at that very moment, photography was not only born as we know it; He also immediately began the search for maximum realism by obtaining snapshots in color.

At the beginning of the 19th century, at the time of Niépce and Daguerre, it was not yet possible to obtain a color photograph, so the photographers decided to use the resources at their disposal to achieve it. They opted to color their photographs using artisan techniques, using dyes and pigments similar to those used by painters in their canvases. In fact, the first one who did it was a Swiss painter named Johann Baptist Isenring. This process had to be carried out completely manually, which made even more expensive photographs more expensive, so that these moments frozen in paper were only available to the bourgeoisie. Photography was born in the form of a means of expression used as a seal of social distinction.

The coloring techniques of the black and white photographs were gradually polished with a very clear objective: to obtain the maximum realism. But not much later, in 1861, the first original color photograph arrived. Its author was the Scottish physicist James Clerk Maxwell, and, curiously, at that time very few paid attention to its innovation. The black and white colored photographs were already much more affordable, and, in addition, they were considered authentic works of art.

In fact, although the technology already allowed to obtain color photographs in a natural way and with a certain quality at the beginning of the 20th century, the popularity of the colored photographs was increasing until 1940. But a little later the first photographic films appeared in the stores. accessible color price, and the colored photographs disappeared in a stroke both in the United States and in Europe. Until the irruption, much later, of digital coloring.

Continue Reading: DxOMark: How the most controversial and famous mobile camera evaluator works on the internet

This is the challenge of coloring a photograph

The techniques we use today to color black and white photographs are radically different from those used in the nineteenth century and during the first half of the twentieth, it is evident. Possibly there are people who continue to color in an artisan way, with oils, pigments and dyes; but most of it uses a computer. In fact, to make our first steps in the world of photographic coloring, we only need a computer and a photo retouching application , such as Adobe Photoshop, Paint.NET or Gimp, among other options. And patience. Much patience.

The professionals usually use, in addition to the computer and the software, a digitizing tablet with which it is possible to act in a much more comfortable way on the image. In any case, there is an essential previous step that all carry out before you start coloring: the preparation and restoration of the original image. Usually the photographs colored with modern digital techniques are old snapshots available on film or paper, so the first thing that needs to be done is to digitize them with a high resolution scanner.

Once they are available in digital format, the ideal is to restore them meticulously to eliminate scratches, stains or any other imperfections that may make them look bad. And there is still another important step before starting the coloring: the process of documentation and research. If we have proposed to give color to a historical photograph it is very likely that objects and clothes whose original tone is completely unknown to us will appear in it. Without the proper references it is impossible to do a reliable job.

For this reason, if we want to create a realistic color that enriches photography, it is essential to investigate to know the historical context in which it was taken. Of course, it is often easier for us to access other color images taken at the same time, even if they have been colored afterwards, but in this case it is important to be certain that the person responsible for the color is a professional who has been documented before carrying the dyeing out.

Experts in coloring black and white photographs often say that getting decent results is simple; what is really complex is doing it well, faithfully recreating the shades and gradients of color. Paying attention to the more subtle details. Interestingly, there is no single technique that offers the best results, although many professionals prefer to “attack” the image by first coloring the skin of the people who appear in the photograph, usually the face and hands.

Then clothing is usually colored, a phase in which, as I said before, it is very important to document well to have reliable historical references. And the last area of ​​the image that is usually given color is the background, a stage that often also requires a meticulous documentation process. It may seem that at this point we already have a good part of the work resolved, but nothing is further from reality. The next step, and perhaps the most important to obtain a truly realistic finish, is the manipulation of light.

If we want the objects and people that appear in a photograph to have a totally credible aspect, it is essential to recreate the way in which the light interacts with each one of them. Light is not only essential for defining shaded areas well, but also for giving volume to objects and preventing them from acquiring a flat and unreal aspect. The funny thing is that the technique used to recreate it is very similar to that used in painting, and requires a very deep domain of color.

The result can be amazing

As we have just seen, it is much more important to know the process of color manipulation and to be thorough than the tool we use to apply it to photographs. Adobe Photoshop is probably the most used application by the experts in the coloring of black and white snapshots, but it is perfectly possible to obtain very good results with free software, such as Gimp, for example. In any case, the really impressive thing is that with a good deal of research, a lot of patience, a deep mastery of color and paying close attention to details, we can get results as convincing as the ones below these lines.

Art or fiasco? The controversy is on the table

This is a pertinent question. In a time when many professional photographers turn to black and white to increase the expressive capacity and intensity of their photographs, it may seem incoherent to dedicate so much effort to coloring historical images originally captured in black and white. Some argue that, in fact, this practice distorts the photographs by means of an absolutely dispensable manipulation. Of course, it is a way of seeing it.

The experts in giving color to these snapshots, however, although they recognize that it is impossible to recover it with absolute precision, usually defend their work by saying that color allows the images to be placed in their context in a clearer way, enriching them. The photographers of the nineteenth century and the first half of the twentieth, unlike the current ones, were forced to use black and white because color films were not yet available. They did not opt ​​for black and white for artistic reasons, which according to them, legitimizes their work provided it is done really well and is supported by a reliable documentation process.

It is a respectable point of view, of course, but it is clear that this is a controversial issue. Cheer up and tell us what you think about it in the comments of the post.