The Raspberry Pi 3 Model B + an interesting iteration of the previous model that arrives with an “accelerated” CPU, dual band WiFi support and also “layered” Gigabit Ethernet support. These improvements, whether they are capped or not, provide better benefits with great news: RPi are still as cheap as ever.

Design: Almost nothing new under the sun 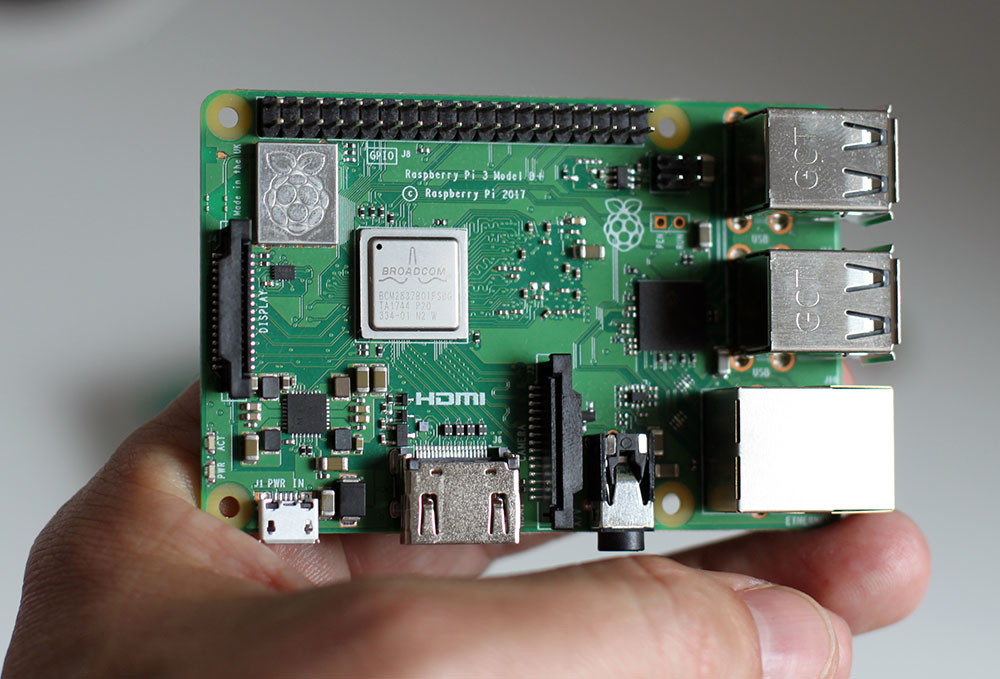 At first glance nothing changes in that crude and honest design of the Raspberry Pi 3 Model B +, which like all its predecessors amazes us by showing us its guts from the first moment.

The small plate on which we find the different circuits, chips and connectors has a layout almost identical to that of its predecessor, but there are some significant changes.

The most striking is probably the presence of a heatsink located above the SoC, something that helps to control the temperatures generated by the CPU now that its working frequency is somewhat higher.

We also find a metal plate that also protects the wireless connectivity chip, both for the WiFi network and for Bluetooth. This protection also has a differential element: the Raspberry Pi’s famous raspberry logo is engraved on that plate.

The arrangement of the connectors matches that of the previous model , and we still have four USB 2.0 ports, the RJ45 port for Ethernet connections, the headphone jack, the HDMI connector, the MicroUSB port for power or the already classic GPIO port. The differences, yes, come in the hardware.

Specifications: More for the same price 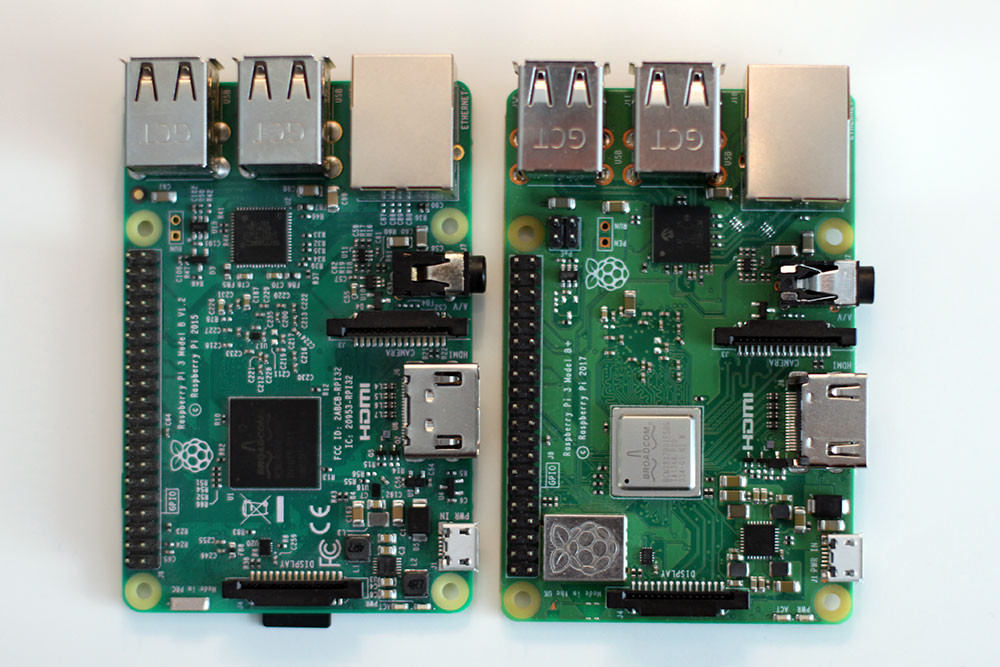 The changes that the Raspberry Pi Foundation has made in this new version of its small miniPC are very interesting, and more than those referring to its power draw attention to those that affect its connectivity .

The processor, for example, is a minimum iteration of the Broadcom BCM2837 that comes with some overclocking : we go from a frequency of 1.2 GHz to a frequency of 1.4 GHz for its four cores, which will undoubtedly help to obtain better performances in many of the tasks that we propose to this miniPC.

There are no changes to the GPU, the amount of RAM or, unfortunately, the USB ports. That means that at the moment we do not have USB 3.0 ports, something that is perhaps one of the novelties of that hypothetical and future Raspberry Pi 4.

We talked about the CPU heatsink, which not only helps to soften the temperatures of the processor when we do work more intensively, but also reduces those throttling operations that reduce the clock frequency when they detect high temperatures. This means that this micro can work in a sustained way with these high frequencies, and without doubt represents a significant improvement over the previous model.

The RPi3B + connects more and better 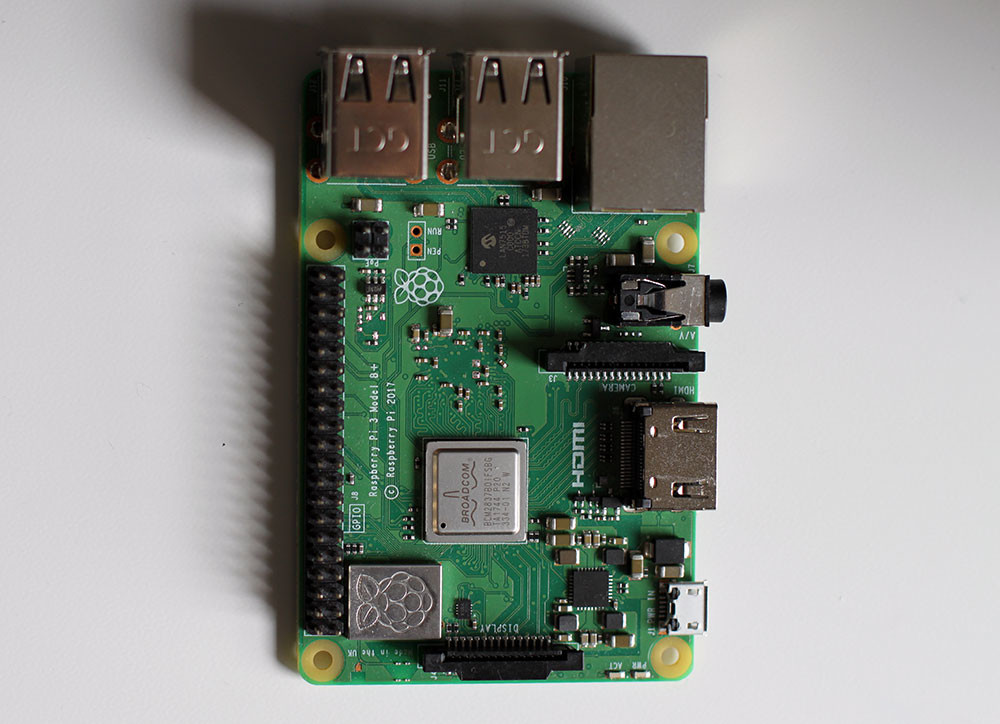 Until that happens (if it happens) where we have striking changes is, as we said, in connectivity. The new Raspberry Pi 3 Model B + now have 802.11ac dual band WiFi support, so we can connect to networks in the 2.4 and 5 GHz band. This will allow us to take advantage of the higher speed of 802.11ac networks for wireless transfers.

On the left the Raspberry Pi 3 Model B. On the right, the Raspberry Pi 3 Model B +. The processor heatsink and the small badge with the logo on top of the wireless connectivity chip make the difference, but pay attention to the small four-pin connector on the top left of the RPi3B + for the “PoE Hat”.
Continue Reading: Intel NUC with Radeon RX Vega: PCs may be small but bullies

In that wireless connectivity we also gain whole with the support of Bluetooth 4.2 compared to 4.1 that was supported in the previous Raspbery Pi 3 Model B. As in the previous case, this allows among other things a somewhat faster and safer performance.

To these new features, two very interesting ones are added in the field of network connectivity. In the RPi 3 Model B + we find Gigabit Ethernet over USB 2.0 connectivity.

What does that mean? Well, on the one hand good news, since we can access transfer speeds higher than those we had in the previous RPi3. On the other bad news, because that support has a bottleneck called USB 2.0 that will make the maximum speeds we can obtain are 300 Mbps, and not those 1,000 Mbps that we would achieve in optimal conditions.

Even so, that change is of course very welcome, but it is that he adds another equally striking: the presence of a new connector on the board with four pins that offers support for the Power-over-Ethernet (PoE) standard.

This interesting option surely attracts the attention of certain users, although to take advantage of it it is necessary to acquire separately the so-called “PoE Hat”, an accessory in the form of an additional plate that connects to those four pins we talked about and that allow us to use the connector of the RPi3B + itself that way.

Performance of the RPi3B + 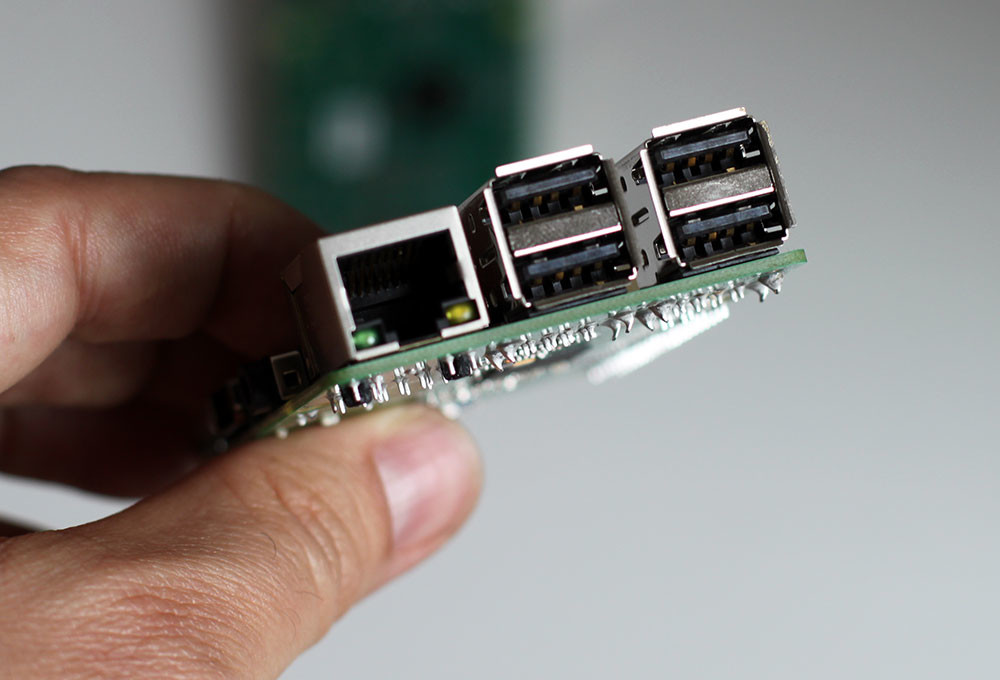 Evaluating the performance of the Raspberry Pi is somewhat more complex than doing it on a mobile, PC or laptop with traditional desktop or mobile operating systems: the software catalog of these systems usually includes a few tools for the execution of synthetic tests, which as always are a good reference to be able to determine performance levels for each device.

In the case of the Raspberry Pi, we went to the well-known Phoronix Test Suite (PTS), which for years has been trying to offer a universal test bench for all types of architectures. This tool has a large number of individual tests among which we chose the ones that seemed most representative.

In addition to that we wanted to do other tests using other solutions such as sysbench, performance in games, in browsers with specific tests that mainly evaluate the behavior of the Javascript engine, or connectivity tests . Here are the different results obtained by sections:

The sysbench test in which the processor is put to work both in single-core and multi-core mode (something similar to what Geekbench does, for example) starts by demonstrating how the higher speed of the Raspberry Pi 3 Model B + makes that overall performance improves sensitively.

Here are some results with the PTS suite. In all tests it is noted that the new Raspberry Pi gains ground against its previous version. It is not a huge advantage, but enough to show that this improvement is interesting, especially when we say the price has remained. 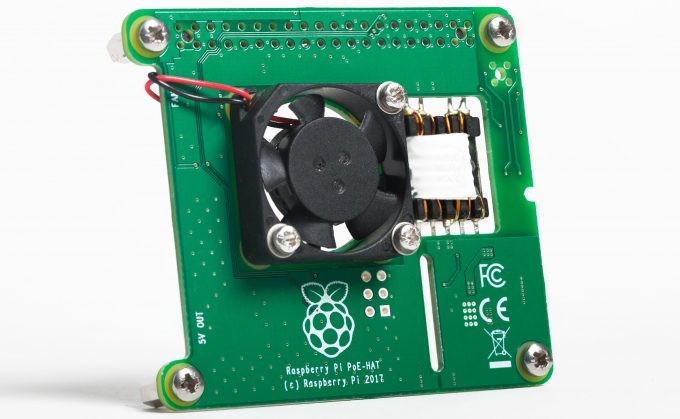 This is also noticeable when we evaluate the behavior of the Chromium browser in both the RPi3B + and in the previous model, the Raspberry Pi 3 Model B (RPi3B). In a test playing Quake III Arena – it is surprising how fluid this game is – and executing the almost legendary “timedemo” we see how the performance in FPS also improves, albeit in a very reduced way.

In the tests relating to network speeds the Raspberry Pi 3 Model B + made clear the advantage when connecting it to cable networks using the new Gigabit Ethernet support, although not completely because it is limited by its USB 2.0 connection. In these tests we evaluate the speeds when transferring a single large file and, on the other hand, a folder with various images, documents and videos.

Interestingly, in the wireless connectivity tests we could see how the performance in the 2.4 GHz band dropped significantly, although we certainly gained integers when connecting the RPi3B + to a WiFi network in the 5 GHz band.

The conclusions after running all tests are expected: gains in processing power are appreciated even if they are not too flashy, but for example if you notice significantly the improvements that Gigabit Ethernet “capada” connection and also that dual-band WiFi support that also helps in those scenarios.

The Raspberry Pi 3 Model B + as a desktop PC 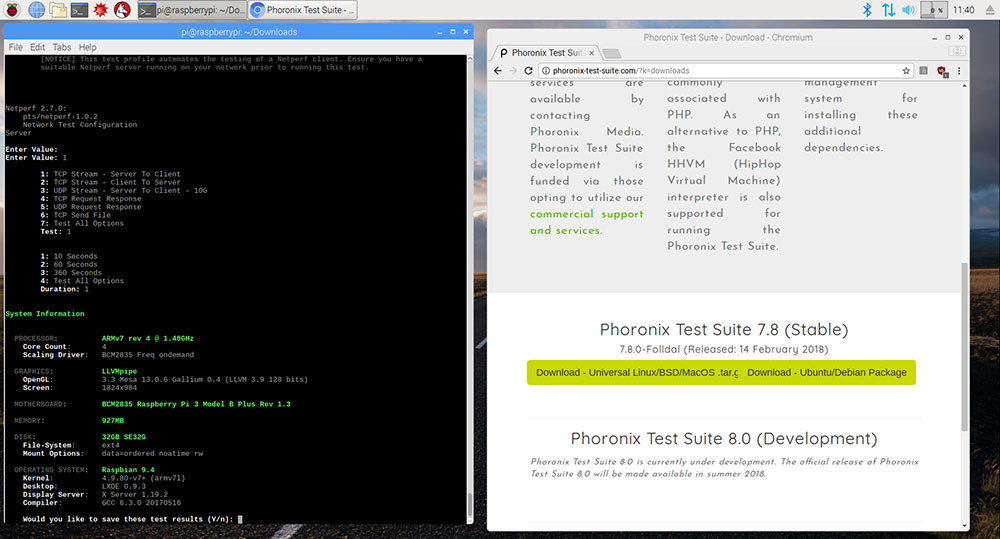 It is always interesting to see how these miniPCs behave in the field of day to day . It is clear that with a $ 35 computer we can not compete with machines 10, 20 or 30 times more expensive, but what can be achieved with the RPi is certainly surprising.

Not only in ‘maker’ scenarios to mount all kinds of systems and learn electronics or programming optimally, but also using the new Raspberry Pi 3 Model B + as a desktop PC to use , something we have done in the past with its predecessors and that we always like to try again with new editions.

In our case, we took advantage of the testing scenario for this field: after installing the Raspbian distribution in a 16 GB micro SD, we were able to start working immediately with both the test bench and the writing of the article itself.

The workflow is what we would have in any team based on a Linux distribution (the current edition of Raspbian with the LXDE lightweight environment is based on Debian Stretch), and from the first moment it is possible to take advantage of the default web browser, for example. Chromium.

Response times are sensitive though acceptable, and all work is fluid unless we start to load the system too much with too many browser tabs. The problem is not so much the power of the processor as the amount of RAM : that gigabyte that the Raspberry Pi Foundation has maintained for years is a major obstacle to having more room for maneuver in that scenario as a desktop PC.

In fact, except for that handicap, being able to work in light sessions with the Raspberry Pi is perfectly possible. Thus, we can listen to music while surfing the internet, watching YouTube videos or working on office documents (the LibreOffice suite is pre-installed as standard).

To all this offer is added of course the catalog of pre-installed educational applications, with Scratch and Wolfram in front, in addition to all that catalog accessible both in the “store” (a graphic package installer) available in the distribution and through the already classic apt that we have at hand through the command console.

Is it the fastest PC in the market? Surely not, but once again it surprises us how much we can achieve with a computer with this cost to which, yes, we will have to connect an HDMI monitor and a mouse and keyboard, either through USB ports, or to through Bluetooth. Pity that only GB of RAM.